For The Sender - Enhanced eBook

Four Letters. Twelve Songs. One Story
Alex Woodard
Be the first to review this product
Price £14.99
Available
Add to Wish List Facebook Twitter Email
Skip to the end of the images gallery 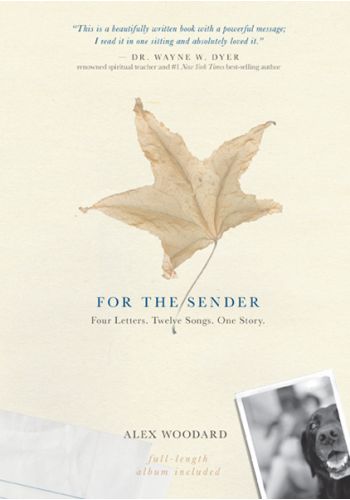 Grammy®-winning singers and songwriters took your letters and turned them into songs?

After years of chasing his dreams, singer-songwriter Alex Woodard finally had a record deal and an album to promote. He offered to write a song for anybody who pre-ordered his self-titled release; all they had to do was send him a...See more

Grammy®-winning singers and songwriters took your letters and turned them into songs?

After years of chasing his dreams, singer-songwriter Alex Woodard finally had a record deal and an album to promote. He offered to write a song for anybody who pre-ordered his self-titled release; all they had to do was send him a letter about their story, and he would write and record a song just for them at his kitchen table.

The promotion came and went-and as the year wore on and the record deal fell apart, Alex watched his best friend, a Labrador named Kona, die in his living room with her head in his lap. Her passing shined a harsh light on how far away Alex really was from his dreams, and autumn found him trying to let go of both Kona and everything he thought would have happened by now. And then he got a letter from Emily.

Emily had finally found the love of a soul mate, a true kindred spirit and best friend, when autumn took him away. Every year since his passing, she writes him a letter to say she misses him and remembers the beautiful moments they had together. She usually tucks the letter away into a box, since there is nowhere to send it, but this autumn she sent the letter to Alex. She didn't want Alex to write a song for her. She just felt like his songs were pieces of himself he gave to others, and she wanted to give him a piece of herself as her own kind of gift.

But Alex did write a song for her. And that song became two, then three, then eventually twelve as more letters came in and Alex showed them to a group of talented musicians who share "family dinners" in his San Diego neighborhood. The letters ranged from descriptions of unfathomable grief and destruction in Haiti to more intimate tales of being and belonging, which soon took on a life of their own through the songs.
He didn't know it yet, but Emily's letter had started Alex down his own path of moving through loss and reconciling broken dreams, culminating one cold December night on a small stage in suburban Atlanta. And he found out for himself that a song is like a letter, and a letter is like a prayer.
It's more for the sender.
Proceeds generated by the songs from each letter go to a cause of the sender's choice.
To learn more, visit:  http://www.forthesender.com/


"This is a beautifully written book with a powerful message; I read it in one sitting and absolutely loved it."
- Dr. Wayne W. Dyer, renowned spiritual teacher and #1 New York Times best-selling author
"Alex Woodard's For The Sender radiates with love and is a beautiful tribute to the resilience of the human spirit."
- Deepak Chopra, MD, spiritual leader and #1 New York Times bestselling author
"From the moment I started reading For the Sender, I couldn't stop. On a coast-to-coast flight, I finished it in one sitting, pausing only to hide my tears. Gorgeous writing and a touching story combines to make this read something special - a word-of-mouth worthy book."
- Cheryl Richardson, New York Times best selling author
"For The Sender is a 'can't put it down' great read that is accompanied by a wonderful soundtrack. An engaging story and concert together. Doesn't get any better than that!"
- Christiane Northrup, pioneer in women's health and New York Times best-selling author
"A good book resonates with your heart. Good music resonates with your soul. So what happens when a talented songwriter pens a memoir? You're taken one step closer to understanding life. The pure emotion that flows from Alex Woodard's For the Sender can hardly be contained within its small size. The short book and accompanying CD tap into rich veins of creativity, sorrow, pride, despair, and most of all, love."
- Chris Henning, Honor Your Spirit blogger
"Woodard discusses the hidden elements of his soul with candid appraisal; his memoir is poetry in prose. His talent as a storyteller is apparent in his writing as well as his music. For anyone intrigued by the inner workings of the artistic mind, Woodard's autobiography will afford a prolonged glimpse, tempered by a jarring dose of realism."
- Julia Ann Charpentier, ForeWord Magazine
"I recommend getting this book ⎯ the actual book, not the ebook. Hold it in your hands and open up the pages, revealing the delicate treasures inside. It sounds like I'm overstating, but For the Sender is not just a story, it's an experience."
- Mary Lavers, Cozy Little Book Journal blogger
"This is an organic tapestry of words and music, melancholy and hope, giving and receiving. It began with letters. The letters triggered emotions, which drew creative talent to themselves in order to achieve expression. Under the mid-wifery of singer/songwriter Woodard, it became a chain of voices, back and forth, turning loss into healing and passion into compassion. Beautifully designed and lovingly presented, this will be a special gift for any one whose heart has been opened by love."
- Anna Jedrziewski and Retailing Insight.

See less
Reviews
Write Your Own Review
Only registered users can write reviews. Please sign in or create an account